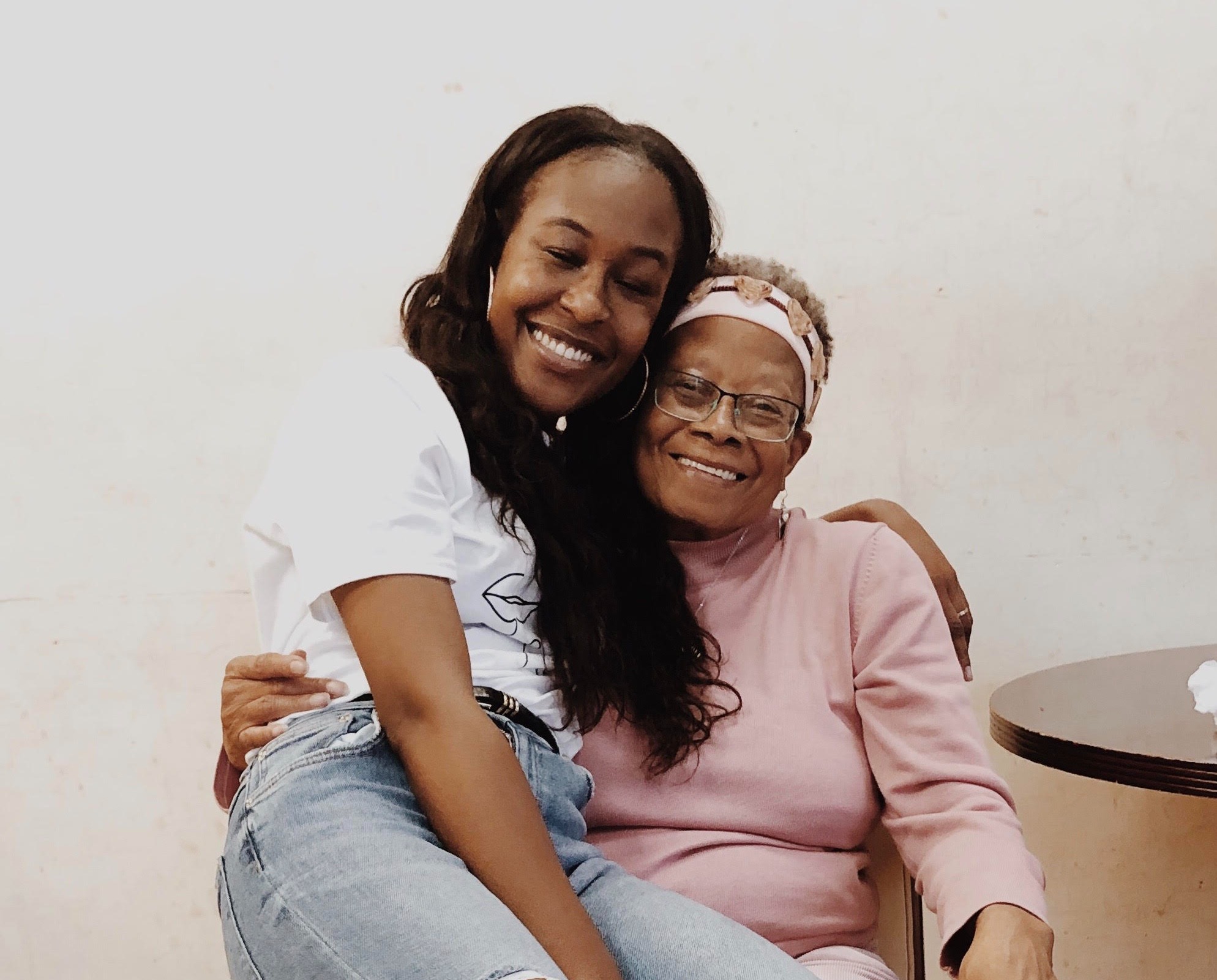 Meet Muriel Ashby: 2nd Place Winner, Do It For the Gram

Muriel Ashby (nominated by her great niece, Kia Robinson), has been crowned 2nd place winner of our Do It For the Gram contest.

Ms. Ashby has never given up on her love of dance. Despite having hip surgery at a very young age, her bubbly, always-on-the go, jokester personality serves as proof that age is just a number. Her willingness to pursue her passion and serve as her niece’s primary guardian with love, support, and compassion is truly inspiring.

Muriel Ashby’s Saturdays are reserved just for her.

She is a grandmother to many in her church and in her Brooklyn, N.Y. community but Saturdays serve as a special time for her to recharge and reset for the week ahead.

“Here on a typical Saturday morning, I try to assign a day for me where I can just be me,” said Muriel. “I do have a colony of cats to take care of here but I try to sleep late when I can.”

If anything, Muriel’s chill Saturdays balance out her very active lifestyle.

“She’s always on the go, on the move, or in dance rehearsal,” said her great-niece Kia Robinson. “She always says, ‘If you don’t use it, you lose it.’”

Muriel is Kia’s great-aunt and has been her legal guardian since Kia was a teenager.

“When I was younger, my mother was diagnosed with Multiple Sclerosis,” said Kia. “Over the years, her disability began to deteriorate and she was unable to do much for herself anymore. When I was 14, it was decided that my mother was better off living in a nursing facility so she could receive the 24-hour care she rightfully deserved. And while that was amazing news for my mom, as an only child, this decision essentially left me homeless.”

Muriel stepped in and welcomed Kia into her home with open arms, and began serving as her primary guardian, taking care of her as if she were her own.

“She never missed a parent-teacher conference, a dance recital, an award ceremony or anything,” said Kia. “She made sure that, even though my mom wasn’t able to physically be there for me as a typical mom would, I always felt supported and loved by her presence.”

These reasons and more are why Kia nominated Muriel for Aura’s “Do It For the Gram” contest. As a motherly figure, Muriel has proven time and time again that biology plays a very minor role in the impact one can have on the young people in their community. She is also known as “Momma Muriel” by those closest to her.

“She’s very thoughtful and friendly, and she takes everyone in as her own,” said Kia. “Everyone in the church started calling her ‘Auntie’ and she accepted it. Everybody is her niece, her granddaughter, or her child.”

Kia said that when she learned about “Do It For the Gram,” she immediately wanted to nominate Muriel, especially when she saw that grandmotherly figures were welcome to be a part of the contest.

Needless to say, Muriel was very surprised when Kia told her that she placed in the contest.

“Kia has been attached to me at the hip since birth,” said Muriel. “Her mother used to always travel with me because I used to travel for my company. When Kia came along, she always came with me.”

Surprisingly, even at a young age, Kia was very concerned about Muriel because she didn’t have any children and her mother had passed away.

“She was very concerned about me because I didn’t have a mother and I didn’t have a daughter,” said Muriel. “Those were her questions to me. She wanted to fill that slot. So that’s how she became so attached to me -- and is still attached.”

The pair have been inseparable ever since, with Muriel actually being inspired by Kia’s strength and resilience in the face of adversity at such a young age.

“Kia has had a rough life through her childhood,” said Muriel. “She lost her grandmother at nine, then her mother became ill with MS and she had to take care of her and prepare food, write checks, all of it. She’s almost been grown on her own for a long period of time.”

Muriel said that she had to step in as a grandmother, aunt, and a sister since Kia was an only child and didn’t have any siblings.

“She did an excellent job on her own,” siad Muriel. “She’s very ambitious and has a lot of goals to reach and is a go-getter. I was a sounding board for her. I didn’t try to interfere with her too much because I wanted her to be herself.”

Muriel’s memories of her own mother often make their way over into her present thoughts, especially when it comes to the special bond she and Kia have.

Things got very interesting one particular holiday when Muriel took a very young Kia to the fabric store with her on one of their trips together. The store had put up their Christmas decorations that included a big beautiful Black angel in their display.

“She said ‘Auntie, auntie! I saw your mother!,’” said Muriel. “The store put up the angel and she took me to see it. When she saw that angel she knew it was my mother. My mother lived with me and I took care of her, and she always told me when she left this earth that she would come back to take care of me. She was my traveling partner.”

Memories like these have deepened the duo’s bond and over time it’s only grown stronger despite their busy lives and schedules.

“She’s way busier than I am,” laughed Kia.

Indeed, Muriel is a member of two dance groups. She performs spiritual dancing with “Ministers of Movement” at St. Paul’s Baptist Church on second Sundays. She also performs with her second group called “Angels of Transformation” for weddings, anniversaries, and other special events.

“We’ve been able to keep ourselves together via Zoom,” said Muriel. “We never stopped having our rehearsals on Tuesdays and Thursdays.”

Muriel has been performing with these two groups over the last 20+ years and believes it’s just her way of sharing her light with the world.

“I love the movement and I love choreography and music, and after I have presented a piece that we have choreographed or done I always feel so blessed,” said Muriel. “It’s a peaceful start to the day.”

Over the years, Muriel has experienced her fair share of medical and mobility challenges starting from a very young age when, as a teenager, she had to have her hip replaced.

But even still, she never gave up her love of dance.

“Ever since she was a little girl she loved to dance,” said Kia. “Dancing was her passion. So, while she healed, she used dance as her form of physical therapy and it worked – well! Over the years she continued to dance and participate in various dance groups in between her schoolwork, and later between her full-time job and even through to her retirement.”

Unfortunately, when Muriel was in her sixties she had to have her other hip replaced.  Still, she never stopped dancing. She used her passion for dance as a tool and ultimately danced her way into her healing.

“I have always danced since I was nine-years-old,” said Muriel. “I used dance as a form of exercise because I didn’t want to go to the gym. It’s just something about movement of the body that excites me but when they introduced dance at the church I wasn’t sure at first."

Muriel’s hesitancy wasn’t due to shyness or a lack of confidence but rather about sharing her gift of dance with the world.

But the nervousness didn’t last long. Muriel is now the most seasoned of the dancers in both her groups and even creates her own choreography.

In addition to dancing in the pulpit, she has also produced fashion shows, designed and modeled clothing, worked as a makeup artist, and traveled extensively with her husband.

She also has no plans on slowing down anytime soon.

“I could go on and on about how she inspires me, but we’d probably be here for days,” said Kia. “She is, and always will be, my biggest inspiration. She is a beam of light in everyone’s life and her ability to brighten up anyone’s day is simply magical.”

As our 2nd place winner, Muriel will receive $2,500 and three Aura Carver frames for her family.

Learn more about our “Do It For the Gram” contest winners here.

Use this code at checkout to get our best deal of the season!

You’ve successfully subscribed your email to get details on exclusive discounts and product launches. We have one more question:

How did you hear about us?

Your answer has been recorded